HOW TO TURN ANY RECIPE INTO LOW CARB GLUTEN FREE 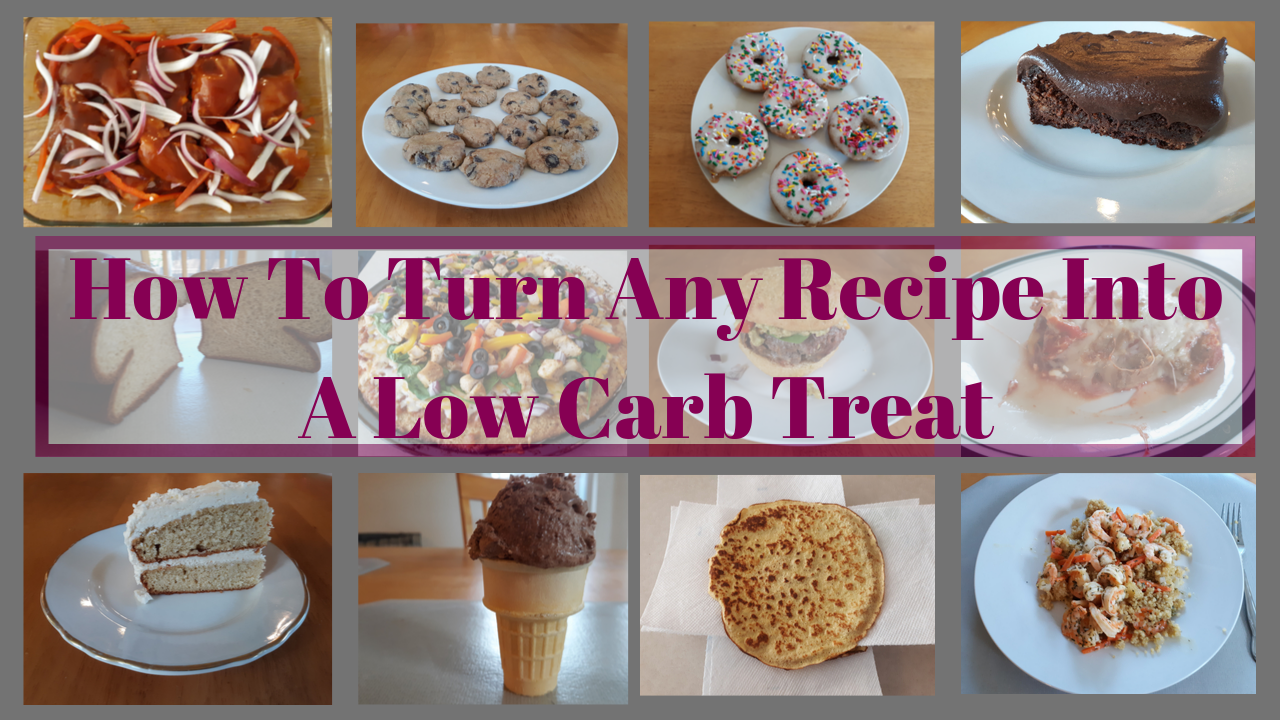 Have you ever looked at a recipe and thought That looks so good but has way too many carbs ? Do you have a favorite recipe that you think you can never eat again because the carb and sugars are way too high ? Before you throw that precious recipe aside check out these helpful tips that can help you turn any high carb baked good into a delicious low carb treat.

What Type of Flour

The first and probably most important element to figure out when trying to make a high carb baking recipe low carb is what type of flour to use for a substitute. Flour is what makes the taste and texture of a baked good. It can make the difference between a fluffy sweet treat and a crusty crumbly nightmare.

There are three main types of flour that I have found to have the best results :

I also like to trade a portion of my flour out for vital wheat gluten but it’s not a must. Many people have allergies or gluten sensitivity and can’t use vital wheat gluten. Don’t worry baked goods without gluten can still be just as tasty.

How To Substitute White or Wheat Flour With Low Carb Flour

Trading out low carb/ gluten free flour is not as simple as trading 1 cup of low carb flour for 1 cup of white or wheat flour. The ratio varies depending on what flour or flour blend is used.

When using garbanzo or any other bean flour do not use it on it’s own. Garbanzo flour has a very dominant flavor so always combine it with a more mild flour like almond flour. When garbanzo flour is combined with another flour it gives the baked good a mild flavor and creates a texture very similar to white or wheat flour.

Coconut flour is one of the hardest low carb flours to on it’s own as a substitute for white or wheat flour. If the flour to liquid ratio isn’t just right the baked good will end up a dry dense mess that turns to paste in your mouth. We’ll talk about flour to liquid ratios in a bit. For now know that if using coconut flour as a substitute for white or wheat flour you only need one third the amount of flour the original recipe calls for. If the original recipe calls for 1 cup of white or wheat flour all that’s needed is 1/3 cup coconut flour. This may not seem like enough flour but when coconut flour comes in contact with liquid it absorbs the moisture and expands in bulk. We’ll talk about this more when we talk about the liquid flour ratios.

From my experience the easiest way to substitute white or wheat flour with a low carb flour is to substitute 1 cup white or wheat flour for 1 cup nut or seed flour. However, the best way to get the taste and texture of a baked good to resemble traditional flour is to use a combination of low carb flours. Using a combination of flours helps balance out the flavors of the low carb flours. Not only does it balance out the flavor but it’s also saves money. Almond flour can get spendy even if it’s made at home like mine is. Combining almond flour with less expensive low carb flour it makes the almond flour last longer and saves money in the long run.

My three favorite binding agents are xanthan gum, psyllium husk powder and vital wheat gluten. When these are individually combined with the liquid in a recipe they create the same gummy texture that the gluten in white and wheat flour create. As a result the baked good will come out light, fluffy and in one piece.

Since vital wheat gluten is made from wheat flour it should be treated like a flour. This means a lot more is going to be needed compared to other binding agents.

After the flour and binding agent have been successfully substituted it’s time to figure out the rising agent.

The gluten that is in the white and wheat flour not only helps with holding the baked goods together but also helps with the rising process. Gluten makes the dough stretchy so it’s able to rise better than dough without gluten.

Baking powder is a combination of baking soda and acid agent (such as cream of tartar) that is used to activate the baking soda. Double acting baking soda acts in two stages. One is at room temperature while the batter is being stirred. The other is while it is cooking. The gases are released while the baked good is cooking giving the dough a little extra help in the rising process.

Next is finding the right natural sweetener. When going low carb stay as far away from white sugar and artificial sweeteners as possible. Not just for the carbs but the chemicals in them are deadly.

When finding the right natural sweetener. Find a sweetener that tastes and acts like white sugar. The two best natural sweeteners that I have found to be the closest to white sugar, contain little to no carbs, and have no effect on blood sugar are erythritol and stevia. However they can not be swapped out one for one with sugar.

Stevia has been my go to sweetener for a long time. I used to by a baking blend that was stevia extract blended with organic tapioca for bulk. This could be substituted one for one with sugar. I have since stopped using that because the company started blending the stevia with maltodextrin which is a chemically made sweetener and can spike blood sugar. I still use stevia for recipes that require a sweet taste.

When substituting stevia for a recipe that just needs to be sweet use 1/4 teaspoon stevia extract or 2 teaspoons liquid or powdered stevia for every 1 cup of sugar.

Erythritol is becoming one of the most popular natural sweeteners for baking low carb or gluten free. It has a firly mild taste and has enough bulk to be used in recipes that require sugar for bulk and sweetness.

When changing a recipe to low carb or gluten free flour it’s important to get the flour to liquid ratio right. Too much flour and the baked goods will turn out dry and dense. Too much liquid and the dough will turn into a soupy mess. There is no set ratio that will work for all low carb flours. Each one has to be looked at individually.

When almond or other nuts are ground into flour their oils are released. For this reason when almond flour is used as a substitute for white or wheat flour the liquid will need to be slightly decreased. Start by decreasing the liquid a few teaspoons at a time. Then when you’re done mixing the dough if it seems too wet let the batter set 2-3 minutes to absorb the moisture. If it still seems too wet add small amounts of flour until the dough is the desired texture. You will also need to add an extra egg for binding and lower the baking temperature by 25 degrees. You may also need to cook the baked good a little longer. If it seems like your baked good is browning too fast cover it with aluminum foil.

If using coconut flour as a substitute for white or wheat flour use 2 eggs for every 1/3 cup of coconut flour and the liquid amount needs to equal at least 1 cup. So, if the original recipe calls for 3 cups all purpose flour use 1 cup coconut flour, 6 eggs and 1 cup liquid. This might not seem like enough flour but as I stated before when the coconut flour comes in contact with the liquid it expands in bulk. Let the batter sit for at least 5 minutes so that the absorbing process can fully take place. Keep the baking temperature and time the same.

A Few Things To Remember

In conclusion changing high carb recipes into low carb recipes does have its challenges and will require some trial and error. Be patient, keep trying and soon your baked goods will come out perfect every time. Hopefully this recipe will help eliminate some of those errors in your trials. Happy baking and keep cooking.

Author: Janet Tabor
Filed Under: Tips And Tricks
SECRET TO BAKING WITH GLUTEN FREE/LOW CARB FLOUR
How To Make An Oven “Hot Box” For Yeast Bread To Rise